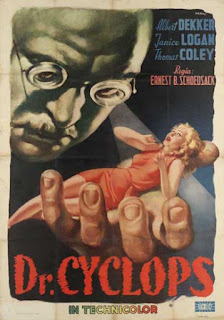 After the short-lived success of using Technicolor in Warner Brothers’ horror films Dr X (1932) such as Mystery of the Wax Museum (1933), it was another seven years before a major studio attempted the format again. In 1940 Paramount released Dr Cyclops, a science-fiction horror movie where the colour format was treated with care as part of a decent budget. Director Ernest P. Schoedsack reteamed with Merian C Cooper, his producing partner on King Kong (1932) to ensure high quality and elaborate special effects in the tale of a group of researchers and civilians miniaturised by a mad scientist in the Amazon jungle. Even the co-producer Dale Van Every had an esteemed pedigree as an Academy Award-nominated screenwriter (on 1937’s Captains Courageous).

The title of Dr Cyclops does not quote the notorious monster of Greek mythology mindlessly. Tom Kilpatrick’s script is a modern fantasy re-telling of the battle of wits between Odysseus and his crew and the giant cyclops Polyphemus who holds them prisoner in his cave in a far-away land. In the film, a seemingly benign scientist Dr Thorkel (Albert Dekker) is experimenting with a new source of radium he has been mining in his camp deep in the Amazon. He raves about his findings to his associate Dr Mendoza (Paul Fix) while a splendidly lurid green glow bathes them. Thorkel is already an intriguing figure. Dekker’s shaven head and coke-bottle glasses were said to be an imitation of the WWII Japanese troops in the Pacific. With his ungainly frame clothed in a rumpled linen suit and the soft beguiling calmness to his voice, a subtler comparison might also be a friendly mole. This impression is soon dispelled though as he cold-bloodedly murders his colleague in the light of his powerful radium beam invention, radiating Mendoza’s face into a ghastly luminous skull.

Thorkel then sends a message to esteemed colleagues back home to come and see him. The party is made up of three scientists: the clinical Dr Bullfinch, Charles Halton before his noted work in To Be or Not to Be (1942) and Capra’s It’s a Wonderful Life (1946), Janice Logan’s Dr Mary Robinson and a rakish mineralogist, Dr Bill Stockton (Thomas Coley). Accompanying them are Victor Killian (Steve Baker) who wangles passage with them in return for the use of his mules and Frank Yaconelli as their whimsical Peruvian guide Pedro.

Killian suspects that Thorkel has found a radium mine and wants a piece of the action. When they arrive, Thorkel is cagey about his work to begin with. He had Pedro procure large numbers of cats, dogs and chickens for his work which are never seen again. In secret, his experiments with radium have resulted in miniaturising Pedro’s horse to a few inches in size. The able trick photography for this is an introduction to the far greater technical skills to come. 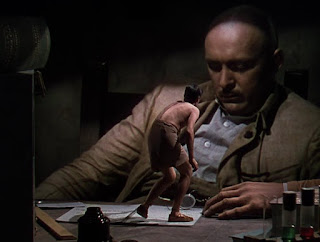 After the team find pitchblende samples that indicate the presence of valuable radium, they snoop in Thorkel’s laboratory. His anger on discovering them flares and then subsides, appearing contrite at his initial secretiveness. He disarms their suspicions with a soothing invitation to see his Condenser contraption. They crowd into the small room whereupon he locks them in and blasts them with his ray that shrinks them to thirteen inches in height. Now they will become his first human test subjects to be studied like freak lab rats – if he can get his hands on them all.

Incidentally, I couldn’t help noticing that whilst almost all the hero team have fashioned togas out of cloth (for some reason their clothes didn’t shrink with them), Pedro has made himself what looks like a nappy.

What sells Dr Cyclops is the superb process photography by two-time Oscar winner Farcio Edouart and W. Wallace Kelley. Assisted by Gordon Jennings’ photographic effects, they convey well the scale differences between the shrunken team and the suddenly threatening everyday world around them.  Hans Drier and his art department craft excellent oversize props and furniture on the sets for the actors to interact with such as an enormous book, a locked door and a huge shotgun they try to aim at Thorkel. At times, back projection is also used with skill to blend large images in the background with the imperilled group in the foreground, or in reverse so that footage of a looming alligator is on our side against back-projected film of the fleeing group.

The money-shot of the movie is a real feat of special effects, all the more impressive for being rendered practically, in-camera, decades before post-production CGI. To show Thorkel taking measurements of the miniature Dr Bullfinch, the effects team display a back-projection of Dekker acting with Halton before him (his eyeline well judged) and then introduce a huge mechanical arm from screen right, flesh-toned and convincingly rendered in detail, to grasp the doctor and relate to him in the same continuous take. It’s a highly intricate set-piece of multiple elements and works extremely well.

As Thorkel measures Bullfinch’s new vital statistics, his prey sees the classical allusion on offer, describing the tiny troupe as “prisoners in Cyclops’ cave”. The insane biologist takes umbrage at the personal reference to his poor eyesight, so unfortunately for Bullfinch he’s chirped his last. Thorkel kills him with a giant swab soaked in poison. Pedro buys it later from a shotgun blast by his employer, falling like a child’s doll into the river. 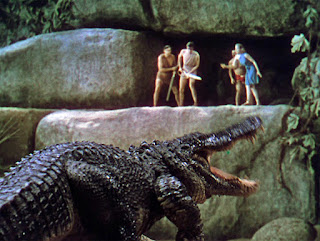 Dr Cyclops is a fun and imaginative mixture of science-fiction ideas and a touch of the macabre, handsomely-mounted with a rare wealth of resources. The visuals are supported by a playful music score from Gerard Carbonara, Albert Hay Malotte and Ernst Toch that add to the lush fantasy production values. Reminiscent of a sumptuous Disney adaptation of Jules Verne, it is hard to believe this little Technicolor gem is from the same era as the dark, dour monochrome cheapies audiences were mainly given. If only Boris Karloff and Bela Lugosi had been showcased with such means.


The religio-philosophical dimension of suddenly having smaller dimensions would be elegantly examined by Richard Matheson’s literate The Incredible Shrinking Man in 1957, while the possibilities of scientific advancement through miniaturisation were lavishly imagined later in Fantastic Voyage (1967).
Posted by Ian Champion at 06:28