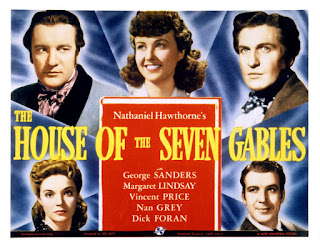 Following the success of The Invisible Man Returns, director Joe May reunited with his leading cast members Vincent Price and Nan Grey, along with supporting performers Cecil Kellaway and Alan Napier, for Universal’s period drama The House of the Seven Gables (1940). The source was a Nathaniel Hawthorne Gothic novel published in 1851, containing the central storyline of a supernatural curse befalling generations of the New England Pyncheon family in their house purchased from the trickery of their ancestor Colonel Pyncheon upon one Matthew Maule in the 1650s. Maule had been a rumoured witchcraft devotee and before being executed for a framed murder aims a chilling oath at Pyncheon that “God has given him blood to drink!” Pyncheon is found dead on the last day of his house’s completion on the land, blood dripping from his mouth. The action then moves forward to skulduggery reflected in his 1828 descendants.

The novel was partly inspired by a demonic real-life connection with Hawthorne’s own ancestors who were involved in the 1692 Salem Witch Trials. He subsequently kept the location for his book. For this film translation (the second after a lost 1910 Edison Company version), the setting was retained but the supernatural curse element was restricted to the page-turning prologue. The unfolding Greek Tragedy pitting brother against brother for the sake of greed is compelling enough without it in the hands of a fine cast and sensitive direction.

In the opening scene, we are shown the contrast between the smug Jaffrey (George Sanders channelling his oily languid Jungle Book and All about Eve arrogance) and Price as his warm-hearted, musical artist sibling Clifford. Jaffrey is obsessed with a long-rumoured fortune allegedly buried in the house. Clifford dismisses the myths and is impatient to sell the property so debts incurred by their father (a disappointingly weak Gilbert Emery) can be paid off and he can move with his cousin Hepzibah to New York. She is played outstandingly by Margaret Lindsay, whose English accent was so convincing when she began her career that she hid her native Iowa roots behind a fake British biography and bagged a role in Noel Coward’s Cavalcade (1933) over at Fox. She is superb in a demanding role requiring a marked change of character over time.

The already stormy early relationship between the brothers isn’t helped when Clifford is angry that their father cannot bring himself to sell their birth-right. He goes too far in accusing the old man of being “chained to the poverty of your traditions”, causing the enraged elder Pyncheon to collapse and die of a congenital throat-constriction far more dangerous than any paranormal family inheritance.

This becomes the turning point as Jaffrey seizes on the opportunity to claim the house by implicating Clifford as culpable. “Murder”, he utters with cold definition. Clifford goes berserk, launching himself at Jaffrey with the fateful “If killing a money-mad fool is murder - then yes!” This comes back to haunt him during a trial so clinical that the jury doesn’t even need to retire to find him guilty.

From Clifford’s prison term onward, the story takes its greatest departure from Hawthorne’s novel, tagging a sub-plot of social reform onto Matthew, a descendant of Maule’s, who becomes his cell-mate on a disturbance charge as an Abolitionist – (Dick Foran, also in 1940’s The Mummy’s Hand). This sows the seeds of a social as well as private conscience in the film that returning writer Lester Cole felt strongly from the shadows cast by Nazism in this period. Jaffrey’s capitalist ruthlessness is woven into the theme as he and his shifty cohort Deacon Foster (Tower of London’s Miles Mander) have been investing the cause’s money in a slave-ship of all things. Clifford’s seventeen years in prison come to an end in 1868, three years after Lincoln’s assassination, so there is plausible justification for this compassionate struggle to be a topical issue.

Our sympathies are appealed to even more powerfully in how Clifford’s absense has impacted on Hepzibah. Lindsay is highly affecting in portraying her former radiant optimism withered into a grave repressed husk, her home shuttered-up and then reduced to serving as a trading store to make ends meet. May’s sensitive direction is also clear in serving Price’s emotional return; he tugs at the heartstrings upon seeing himself greyer in his bedroom mirror, feeling the moth-eaten damage to his clothes and then coping with the overwhelming and moving reunion with Hepzibah.

The film is not simply awash with doom-bringing though. Alan Napier impresses even more with his pre-Batman film versatility as the bewhiskered waggish postmaster Fuller. Cecil Kelloway as Philip Barton makes a genial family barrister and Foran’s guise as Mr Holgrave under Hepzibah’s roof gives a pleasant bulwark against the evil machinations of Jaffrey. He is lit up in turn by Nan Grey’s lovely innocence as distant cousin Phoebe Pyncheon. 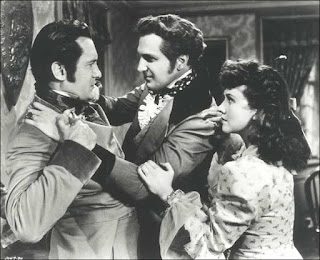 There’s a palpable sense of a net closing in during the third act as Jaffrey circles the house more hungrily at his brother’s return. Holgrave/Maule spreads rumours to the newspaper for Jaffrey’s ears that Clifford has been scouring the property for the fabled treasure. Watch Sanders’ delicious cough of faux-unconcern on his “Very amusing” at the gleaming possibility of half a million dollars to be had. The chickens come home to roost in the form of the enraged fellow Abolitionists he has swindled, allowing Clifford and Hepzibah the satsfying revenge of seeing Jaffery fall victim to the very avarice he benefitted from all those years ago.


The House of the Seven Gables is ultimately not a horror film in the traditional sense: there are no explicit spectral visitations haunting the family, nothing lurid or exploitative in the on-screen deaths. Nevertheless it works very well as a gripping and atmospheric drama drenched with ugly hidden motives, guilt, redemption and cold justice and is a credit to the restraint and taste Universal could be capable of in the genre.
Posted by Ian Champion at 04:41